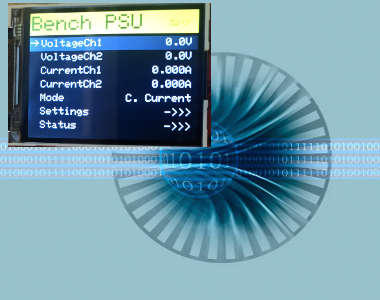 Sometimes the input or rendering capabilities of the built in plugins may suit your purposes, or your hardware may not be supported. In these cases it is possible to either write a custom renderer from scratch, or more likely generate a new Drawable in the case of a graphical device.

This article assumes you are customising an input or display renderer plugin, so that it handles input or displays content differently, rather than building one from scratch. Note that this is an advanced topic and requires considerable C++ experience.

Firstly, build your menu along with the display driver for your display. This will put the rendering files into your project that are compatible with your display. It is recommended at this point that you ensure all is working, before moving forward to make any modifications.

Generally the first step is to locate and then rename the renderer header and source file. These will normally contain the name of the underlying driver such as u8g2 for example. You should rename these files in order to avoid them being overwritten by any future operations in the designer UI.

That’s it, at this point you can make adjustments to the renderer safely, without risking the changes being lost by round-tripping with the designer.

Real world rendering classes extend from one of three base classes, we’ll discuss the pros and cons of each here:

Before trying to modify the class you should probably read through the API documentation, especially look at the documentation for the chosen render in detail. Never make changes to files inside tcMenu library, these will be overwritten in future updates.

There’s also a dialog class within most renderers that will normally extend from either BaseDialog or MenuBasedDialog. The API documentation for this is in BaseDialog.h. If you want to also override how dialogs look, you’ll need to change the rendering here too.

Creating a drawable for an unsupported display

You can choose to create your own drawable now in tcMenu Designer, from code generator, for the display option choose, “Create Drawable for an unsupported display”. This will put all the code needed to create a GraphicsDeviceRenderer in your menu, and give you an empty drawable to fill in. It’s pretty self-explanatory how to fill in the drawable.

Most of the input plugins work based on IoAbstraction’s switches SwitchInput class. It’s worth fully understanding this class, as it’s used by most input methods in tcMenu. Generally speaking the generator will add code to the setupMenu() method that’s located in the <projectName>_tcMenu.cpp. Do not directly modify this file. Instead, follow the steps below:

Back to tcMenu main page