Rotary encoder with non-polling (interrupt based) switches from PCF8574 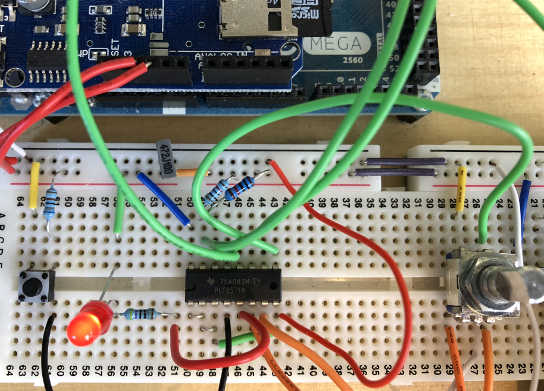 IoAbstraction has full support for interrupts on most devices, meaning we can connect a Rotary Encoder to an Arduino using a standard PCF8574 IO expander chip. In order to do this we need the PCF8574 /INT line to be connected to an Arduino pin that supports interrupts (such as pins 2 or 3).

Further, you can also have switches handle push button input without polling, by initialising for interrupt, especially useful with IO exapnders.

Ensure you’ve obtained the IoAbstraction library, then this example is packaged as an example named interruptSwitchEncoder8574. We’ll examine some parts of the sketch here, but the full sketch is included with the library. Also, below is the circuit needed for this example:

First in order to use the PCF8574 abstractions, we must include the library (and the Wire extensions):

Before using any i2c devices, we must call begin on Wire during setup:

Then we must initialise the switches part of the library that controls rotary encoders and buttons. First we must tell it where the rotary encoder and buttons reside, in this case they are wired to a PCF8574 device, so we call ioFrom8574 with the address of the device, and the interrupt pin where the devices /INT pin is connected. The second parameter defines pull up or down logic for the switches. With PCF8574 it must be PULL_UP logic.

Then for each switch we define a function that will be called back when the switch is pressed, if you prefer you can use the same function more than once, the callback tells you which button was pressed. Here is an example:

And once the callback functions are declared, in setup we add the buttons to switches. Here are examples:

Once this is done, we set up the rotary encoder by providing a call back for when there is a change and initialising it with suitable values:

As with taskManager, switches needs the following in the loop method. Instead of doing things with delays, call task managers schedule functions.