EEPROM implementations that are seamless between 8 and 32 bit 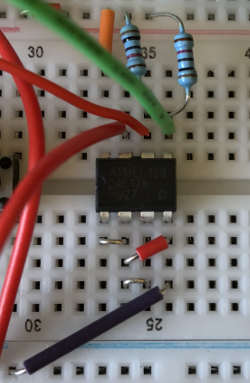 If like me you use both 8 bit AVR and 32 bit boards, you’ve probably already noticed that there’s no EEPROM support on many 32 bit boards. I think that’s quite unfortunate as EEPROM storage is very useful for many applications.

Relying on memory backup like many systems today do, is nowhere near as reliable (a flat battery loses everything). Further, I’ve even seen discussions where people suggest using an area of program Flash as an EEPROM, I don’t personally like it as flash write cycles are generally an order of magnitude lower than EEPROM, but it’s now supported via the EEPROM class wrapper.

There’s a readily available series of EEPROM IC’s from Atmel in the form of the AT24Cx range; which offers various capacities in a 8 pin package over i2c. This library abstracts either AVR or I2C ROMs with a single interface, so you can easily interchange them just changing the implementation.

All the below classes implement this interface, when you want to work with an EEPROM in a function, always use this. For example:

This implementation is based on the AVR EEPROM storage and therefore is only available when the platform is AVR (Uno, Mega etc). It wraps all the eeprom functions, and makes it easy should you later want to port to a 32 bit board. Below shows how to create this type of ROM.

This is an internal, ground up implementation that follows the i2c EEPROM standard, it is compatible with most devices including the At24Cx range of eeproms. To use this you need to set the address for the device, normally 0x50 to 0x57 depending on the address selection pins and the page size for the device; the below table shows page sizes for common devices.

First include the required header:

To create this type of ROM we need the i2c address and page size:

The circuit for an i2c EEPROM (nearly all share same pin-outs):

This class wraps the EEPROM class available on many Arduino boards for use with this abstraction. Firstly to use the wrapper you must include:

Unlike using the usual eeprom classes, where we recommend you create the object globally in this case you should create it locally just as you’re about to use it. Also, on 32 bit boards such as the ESP range, you’ll need to call EEPROM.begin(size) before using and EEPROM.commit() after the writes are complete yourself. Bear in mind what I said earlier, FLASH has far less cycles than regular EEPROM, so save sparingly on 32 bit boards.

Fulfills the interface but actually does nothing, useful for when EEPROM support is optional. Below is an example of how to create this type:

If you tend to unit test your embedded code, you can also mock out the EEPROM. This implementation uses a little RAM instead, defined in EEPROM_MOCK_SIZE and defaults to 128 bytes:

It has an additional method useful for error checking, to see if all is good.

Other than this, it behaves identically.

Reading and writing values - all implementations

There are method to read and write both primitive types and arrays, 8 bit, 16 bit and 32 bit values can be written easily with arrays also supported.

To read a byte from ROM at location romStart

To read a 16 bit word from ROM at location romStart

To read a 32 bit long from ROM at location romStart

To write a byte back to ROM storage at location romStart

A word about EEPROM performance

EEPROM storage is slow, don’t read it frequently during program run, it will slow down your code, especially the i2c variant; which probably has a read bandwidth of around 40K/sec. Further, writing is even slower, and there’s a limited number of cycles so only write when you need to. One common method is to capture the power down state and write out any updated values. See my article about power detection. Another is to have a save menu option or button that will perform the save.