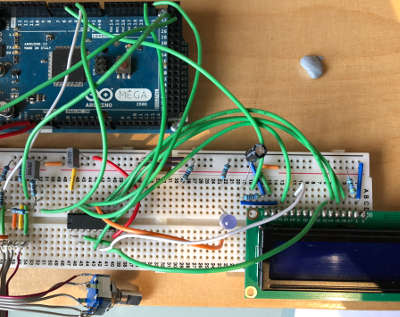 Have you ever wanted to treat button presses in Arduino similar to other languages, where you get an event callback when the switch is pressed? Look no further, the IO abstraction library can do that with very little fuss. In fact it can also do the same for rotary encoders as well, treating them similar to how scroll bars work in desktop applications.

To start we need to get the IoAbstraction library and open the buttonRotartyEncoder example. This example shows how to use a rotary encoder and two switches (the encoder push button and any other switch) with the switches class, outputting the buttons and rotary encoder state to the serial port.

A walk through of the code

Link to the example sketch file

This sketch may look slightly different when you first see it, at the top of the file are a lot of event handlers, they are called by switches when buttons are pressed or the encoder changes value. An example callback is shown below:

In the setup of the sketch we see that the event handling for switches is set up, and we tell switches to use arduino pins for IO.

We then go ahead and set up the rotary encoder, setting the range of values to be between maximumEncoderValue, starting out at 100:

Alternatively, we can mimic the function of a rotary encoder by using Up and Down switches, these two buttons are controlled by the switches (IoAbstraction) library.

Notice that the loop function just contains one line, as everything else is controlled by TaskManager.

For more detail, there’s complete documentation for the library. In addition to this, there’s also lots of other examples packaged with the library.