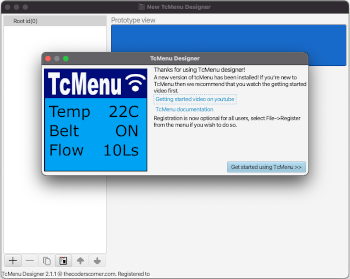 It has been quite a bit more than a week since the last update, but a lot has happened in that time! First, we released version 2.1.3 of the library, and switched the designer to use the 2.1 plugins by default. That means that we’ve opened up themes for everyone to use. We’ve also made it really easy to rollback too.

However, let’s take a look at where we are now, since the move to a single code base for designer. Firstly, we’ve made several releases of the designer with improvements and fixes, it’s far easier now there’s only one code base to test and ensure it works. We are now able to round trip much faster and that should benefit everyone. In the next version you will even be able to choose more than one remote/IoT connector at once.

This new IoT workflow is backward compatible in that old code will work unaffected, and a round trip through the designer will replace the old setup code with the new. Although the above sounds large, in reality it was a clean-up of what we already had, so 2.2 library would work with 2.1 plugins. The only requirement is that when using the 2.2 plugins, you need the 2.2 libraries.

We are also going to improve plugin updating in the UI, so that you can get any version of the plugins that we have available on the server. However, the recommended ones will be marked with the stream name and selected by default. For example if you were on stable:

Although they are served up to make life easy, the core packaged plugins are just the contents of the github tcMenu/xmlPlugins directory, we build them with every release. We then serve them from our site so that you can easily upgrade automatically.

Finally, we are also in the process of adding more automated unit and integration tests. We are trying to get as much of the UI tested as possible, and also ensure very high coverage in the code generator. The mbed code generator has a full test with every single menu item type and more loaded plugins too.