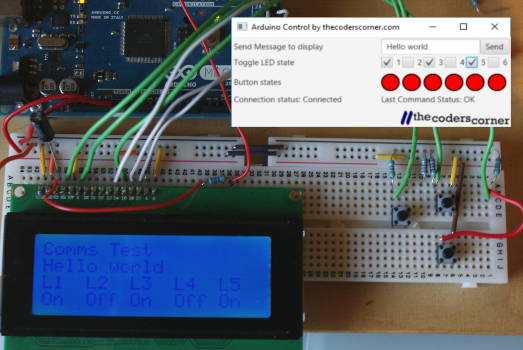 In this article, I present an example showing how to connect an Arduino device to your PC using USB serial and Java. USB serial is available on nearly all Arduino based boards. Further, there are serial interface Java libraries that can connect to an Arduino.

For an out the box complete solution checkout our new BETA library tcMenu library for Arduino including remote control. TcMenu not only provides a full menu system with designer, but also remote control from Arduino to Java using RS232 or Ethernet.

This will require that you have the following components to hand:

Once you have all of the above, firstly you’ll want to wire a 20x4 display to the Arduino as per the link. Take note of the ports used for the various connectors as they will be needed to set up the sketch later. Note that this script uses PWM contrast based on the link above.

Now wire the switches in as well, each switch should be wired to the board as per the example circuit on the left (never use less that a 4k7 resistor for this or the current drain will increase). At 4k7 the current drain for each switch when on is about 1mA; which is not particurly high even with a few switches normally on.

At this point you should have both the 20x4 display and a few switches connected according the circuit above. Now is the time to load the code onto the Arduino device. Switching to the PC, within the source code you’ll see a directory called arduino/commandServerRS232, this is the Arduino code, copy it into your Arduino folder, normally under the home area or Documents on Windows. In the script there are some changes that need to be made, in order to tell the script where to expect the LCD display and also the buttons.

Setting up the arduino sketch to run

Once everything is wired up, you will need to enter the pins used for the display and switches noted earlier into the sketch. Change the constants at the top of the sketch as shown in the example below (using your own settings). In my example I had the buttons connected on bins 24-26.

Now we configure the serial communication speed, I set it to be 9600 baud but over USB, it can reliably run faster.

Lastly, indicate which ports you wired up your LCD display to.

As long as all is wired up correctly you should be able to run the script on your Arduino, the display should initialise and look like the example below. If not, switch off and check your wiring and code carefully. The PWM contrast setting can be adjusted in the setup() section of the script.

Building the Java code on your PC / Mac

Now is the time to obtain and build the Java source on your PC / Mac. For Java development I recommend IntelliJ IDEA that I use myself and has both free and commercial versions available for PC / Mac / Linux. Most Java IDE’s will be able to import the maven pom.xml as a new project, if you use this method all dependencies will be obtained automatically using the maven POM.

There are several examples contained within the code, you want to look in the com.thecoderscorner.example.datacomms.rs232commands package. In order to run the project, run the class:

If all is working at this point you should see the serial settings dialog requesting the port and speed (above left), choose the usual serial (COM) port that Arduino studio is using, and set the speed to 9600 or whatever you set the Arduino side to.

Once done you should see the main screen (above right), Connection status is shown in the lower left corner, and the status of the last command sent on the lower right.

Sending a text message to the 20x4 display

Pressing any switches on the board

Likewise if you press any of the switches connected to the Arduino, they will show on the Java UI at the next status interval (set to approx 1 second on the sketch). There is a combined status update sent by the board every second that includes the latest switch states.

Changing the LED combo boxes on the PC

If you tick any of the combo boxes in the Java application, you’ll see the L1 - 5 change on the Arduino display.

More about the Java application

There are two Windows in the application, both are Java FX based and use the FXML format. They can be loaded into Scene Builder and designed graphically. There is a resources directory that contains both of the FXML design files and a logo.